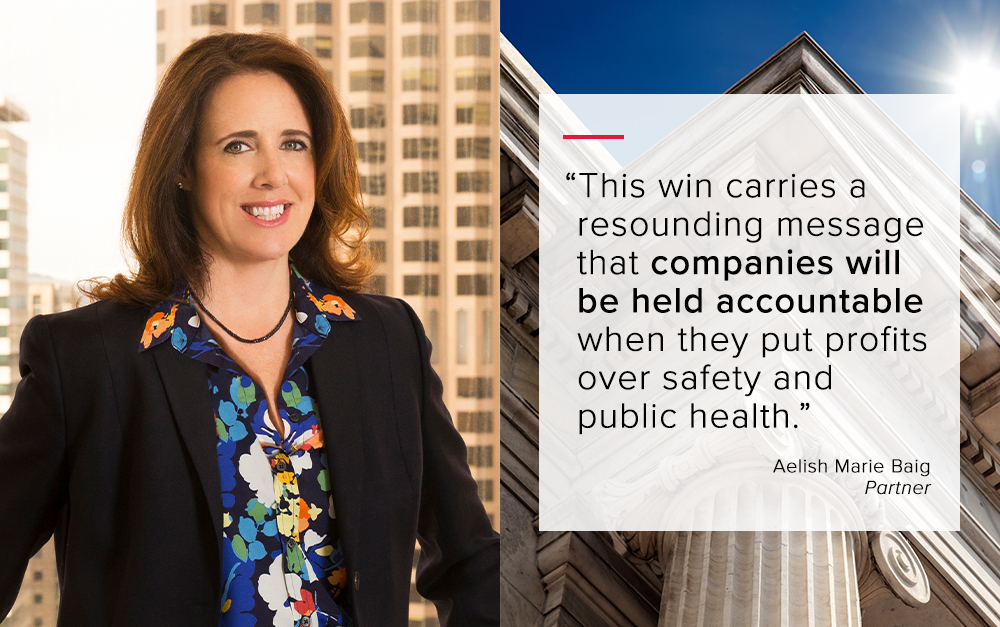 On August 10, 2022, Judge Charles R. Breyer of the United States District Court for the Northern District of California held that Walgreens “substantially contributed” to the opioid epidemic in the City of San Francisco in a nationally watched federal bench trial. The court ruled that Walgreens failed to perform due diligence as required by regulations and did not report suspicious orders to the DEA for 15 years. In an indictment of Walgreens’ conduct, Judge Breyer concluded that the “link between Walgreens’ violation of its regulatory duties and the resulting harm is direct.”

Robbins Geller Rudman & Dowd LLP’s trial team, led by San Francisco partner Aelish Baig, together with co-trial counsel from Lieff Cabraser Heimann & Bernstein, Levin Papantonio, and Simmons Hanly Conroy, represented the People of the State of California by and through the San Francisco City Attorney in the trial that began in April 2022 and concluded in July 2022. The case, alleging that opioid manufacturers, distributors, pharmacies, and marketers facilitated San Francisco’s opioid crisis and created a “public nuisance,” was chosen as a bellwether in a broader nationwide multi-district litigation.

“This win carries a resounding message that companies will be held accountable when they put profits over safety and public health,” said Baig. “We have been honored to represent the People of the State of California and to work with San Francisco City Attorney David Chiu and his team on this important case. This win is important, and the fight to hold all who fueled the epidemic accountable continues. We’re especially grateful that the court opened the trial online to the public and issued such a comprehensive, detailed opinion because it’s critical for our communities to collectively understand how this crisis unfolded.”

In San Francisco, opioid addiction has been an ongoing crisis for decades. Baig and the trial team presented evidence of the “catastrophic” impact of the crisis. As Judge Breyer wrote in his opinion:

Thousands of city residents, from all walks of life, struggle with addiction. Widespread opioid use has strained the city’s hospitals. It has forced streets, parks, and public spaces to close. It has exacerbated crime and homelessness. Every year, San Francisco devotes significant resources to a multiprong fight against the opioid epidemic. That fight includes this case.

The epidemic of prescription opioid abuse began in the 1990s with marketing efforts that painted opioids as a safe method for treating pain while downplaying the risks of addiction. The amount of opioids prescribed and distributed continued to increase. As the medical community realized opioid abuse was rampant, prescribing slowed down, but many patients had already become addicted and began to turn to illegal drugs, such as heroin and fentanyl.

Walgreens, as a distributor, was required to take “reasonable steps” to prevent opioids from being diverted and ensure prescriptions were medically legitimate. However, the trial team presented “overwhelming evidence” showing that Walgreens instead “gave short shrift to its regulatory obligations for fifteen years.” Walgreens pressured pharmacists to fill prescriptions quickly and ignored pharmacists who warned the company about suspicious patterns from specific prescribers. As a result, Walgreens, the largest pharmacy chain in San Francisco, dispensed “hundreds of thousands of red flag opioid prescriptions without performing adequate due diligence.”

“The opinion tells a devastating story – it’s a history of the opioid crisis told through the story of one city, San Francisco,” said Boca Raton partner Paul Geller, a member of Plaintiffs Executive Committee that directs the nationwide opioid litigation. “The crisis unfolded, as Judge Breyer reveals, in waves and has continued unabated for over 15 years. It is a sobering, comprehensive indictment of the callous practices that harmed so many people. I hope this decision and this story will be read in Big Pharma boardrooms all across the country. Every drug company is going to have to reckon with the striking, painstaking account set forth in the judge’s opinion about this conduct and the harm it creates – and ensure this never happens again.”

Walgreens was the last remaining defendant in the case. Each of the other defendants reached multi-million dollar settlements with San Francisco that were negotiated with Robbins Geller’s Paul Geller. First, the “big three” distributors — McKesson, Cardinal Health, and Amerisource Bergen — and manufacturer Johnson & Johnson were severed from the case when San Francisco participated in the $26 billion nationwide settlement with those companies. More recently, Endo Pharmaceuticals, Allergan, Teva Pharmaceuticals, and Anda, a distributor owned by Teva — reached combined settlements of nearly $70 million.