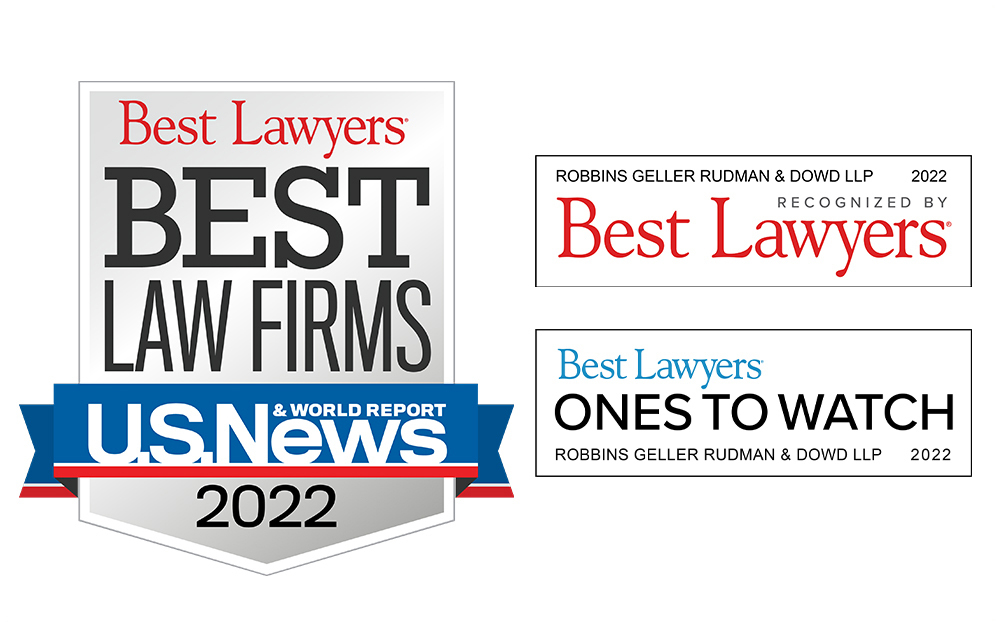 “Achieving a tiered ranking signals a unique combination of quality law practice and breadth of legal expertise,” stated U.S. News. Robbins Geller “received a tier designation [that] reﬂect[s] the highest level of respect a ﬁrm can earn among other leading lawyers and clients from the same communities and practice areas.”

In the past year alone, the Firm secured an $809.5 million settlement (pending approval) in a securities fraud class action against Twitter. In addition, the Firm’s founding partner Paul J. Geller, along with partner Shawn A. Williams, secured a $650 million settlement against Facebook after the company violated a biometric privacy law in Illinois – the largest class action privacy settlement ever against Facebook. The Firm achieved another record after securing a $1.21 billion settlement against Valeant Pharmaceuticals, the largest ever securities fraud class action recovery against a pharmaceutical manufacturer. Additionally, Paul served as one of the lead negotiators, along with co-counsel and multiple state Attorneys General, that secured a nationwide $26 billion settlement with the pharmaceutical industry over its conduct in the nation’s opioid crisis. The national settlement promises to deliver billions in funds to communities impacted by the opioid crisis to support education, intervention, treatment, and recovery, as well as transformative reforms to the manner in which opioids are distributed in the United States.

This award comes on the heels of Robbins Geller receiving numerous accolades this year. The Firm received Band 1 rankings by Chambers USA, and Benchmark Litigation named Robbins Geller as San Diego Firm of the Year and highlighted Robbins Geller as “one of the country’s best-known plaintiff shops” for “excellent work, top-notch communications, responsiveness, knowledge and absolute best-in-class legal services.” Robbins Geller was also recognized as Securities Group of the Year by Law360. Firm attorneys have received several awards this year including Best Lawyers and Ones to Watch by Best Lawyers®, Super Lawyers by Super Lawyers Magazine, Daily Journal Top 100, Litigator of the Week by AmLaw Litigation Daily, and Elite Trial Lawyers by The National Law Journal.

More information on U.S. News’s methodology can be found on its website.