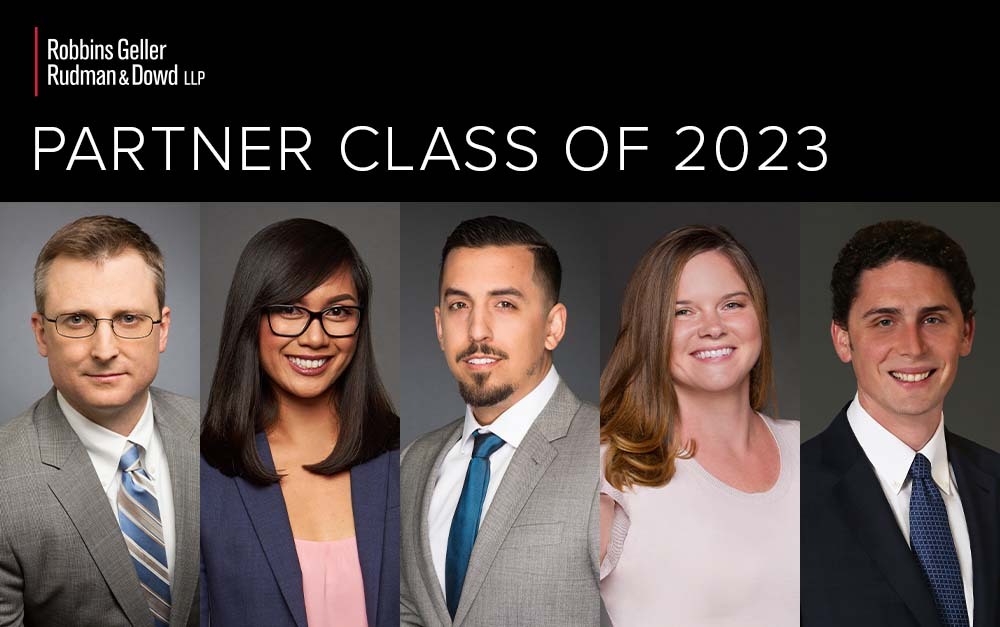 It’s an honor to welcome this group of standout attorneys to the partnership. Each one exhibits extraordinary commitment to our clients and values.

“We’re extremely proud of this year’s new partners. They demonstrate remarkable dedication to our clients and excellence in legal practice. They fight for our clients with talent, passion, and drive, and we’re proud to see them advance within the Firm,” said partner Darren Robbins.

Partner Paul Geller commended the new partner class: “It’s a wonderful day when we welcome new partners at the Firm. This class is a stellar group of lawyers who put their clients first, have a demonstrated record of legal excellence, and love what they do.”

Black is a partner in Robbins Geller Rudman & Dowd LLP’s San Francisco office, where his practice focuses on complex securities litigation and shareholder derivative litigation. He joined Robbins Geller after working as a summer associate with the Firm in 2012.

Before joining the Firm, he was a Sanctions Investigator at the Office of Foreign Assets Control, U.S. Treasury Department, where he investigated and assembled the evidentiary cases against targets of U.S. financial sanctions, and tracked the finances and assets of those targets.

He earned his Bachelor of Arts degree in History from the University of Michigan and his Master of Arts degree in International Economic Policy from American University. He received a Juris Doctor degree from the University of Michigan School of Law, where he was the Comments Editor for the Michigan Journal of Private Equity & Venture Capital Law, and clerked at the U.S. Securities and Exchange Commission, Division of Enforcement.

Before joining the Firm, Dwoskin focused on consumer financial services, employment, and other complex commercial litigation. In this capacity, he developed significant trial and appellate advocacy skills in state and federal courts around the United States. During law school, he was a legal extern at the South African Human Rights Commission in Cape Town, South Africa and a summer law clerk for the Honorable Robert M. Gross of the Fourth District Court of Appeals in West Palm Beach, Florida. He was also an intern in the Office of the Prosecutor at the International Criminal Tribunal for the Former Yugoslavia in The Hague, Netherlands, after having received a Humanity in Action Fellowship.

Dwoskin earned his Bachelor of Arts degree in Political Science from Columbia University and his Juris Doctor degree from the University of Michigan Law School, where he was awarded a Dean’s Scholarship.

Janoski is a partner in Robbins Geller Rudman & Dowd LLP’s San Diego office, where his practice focuses on complex securities litigation. He was part of the litigation team for Schuh v. HCA Holdings, Inc., which resulted in a $215 million recovery for shareholders, the largest securities class action recovery ever in Tennessee. The recovery represents more than 30% of the aggregate classwide damages, far exceeding the typical recovery in a securities class action. He was also a member of the Firm’s trial team in Hsu v. Puma Biotechnology, Inc., a securities fraud class action that resulted in a verdict in favor of investors after a two-week jury trial. Most recently, he obtained a $350 million settlement on the eve of trial in Smilovits v. First Solar, Inc., the fifth-largest PSLRA settlement ever recovered in the Ninth Circuit.

He received his Bachelor of Arts degree from the University of California, Santa Barbara, double majoring in Business Economics and Global Studies. He earned his Juris Doctor degree from the University of California, Hastings College of the Law, where he graduated magna cum laude and was named to the Order of the Coif. While in law school, he worked as a Production Editor for the Hastings Law Journal, was an award-winning oralist for Hastings’ Phillip C. Jessup International Law Moot Court Team and served on the Executive Board of Hastings’ La Raza Law Students Association. In his final year at Hastings, he served as an extern to the Honorable Jacqueline Scott Corley of the United States District Court for the Northern District of California. Upon graduation, he was recognized for Outstanding Achievement in Pro Bono, primarily for his work assisting Spanish-speaking clients at the San Francisco Bar Association’s Legal Advice and Referral Clinic.

Kelly is a partner in Robbins Geller Rudman & Dowd LLP’s San Diego office, where she represents large institutional and individual investors as a member of the Firm’s antitrust and securities fraud practices. Her work is primarily federal and state class actions involving the federal antitrust and securities laws, common law fraud, breach of contract, and accounting violations. Her case work has been in the financial services, oil & gas, e-commerce, and technology industries. In addition to being an attorney, she is a Certified Public Accountant.

Kelly was an important member of the litigation team that obtained a $500 million settlement on behalf of investors in Luther v. Countrywide Fin. Corp., which was the largest residential mortgage-backed securities purchaser class action recovery in history.

She has been named a Rising Star by Super Lawyers Magazine and was nominated for the San Diego Daily Transcript’s Young Attorney award. Before practicing law, she worked as a securities auditor and on mergers and acquisitions and other significant accounting transactions with one of the Big Four accounting firms.

Kelly earned her Bachelor of Science degree in Accounting with high distinction from Pennsylvania State University and her Juris Doctor degree from Rutgers University-Camden. While at law school, she participated in the Judge James Hunter III Moot Court, earning herself a “Top 5” brief during the competition, before going on to serve as a Board Member for the Moot Court in 2010-2011. She was also elected as her school’s ABA representative, served as the law school’s softball league co-commissioner, and represented juvenile defendants as a member of the school’s Children’s Justice Clinic.

During law school, she served as a judicial intern to the Honorable Andrew J. Smithson in the Mercer Vicinage and the Honorable Gwendolyn Blue in the Camden Vicinage of the Superior Courts of New Jersey and worked as a summer associate at the Firm.

Oliver is a partner in Robbins Geller Rudman & Dowd LLP’s San Diego office. Before joining the Firm, Oliver served as a judicial law clerk to the Honorable Anthony J. Battaglia of the Southern District of California. At the Firm, her practice focuses on complex securities litigation. Most recently, she assisted in defeating defendants’ motion to dismiss securities fraud claims arising from purchases on Israel’s Tel Aviv Stock Exchange in In re Teva Sec. Litig. (D. Conn.). Oliver was also a member of the litigation teams of Robbins Geller attorneys that successfully recovered hundreds of millions of dollars for investors in securities class actions, including In re Novo Nordisk Sec. Litig. (D.N.J.) ($100 million recovery), Fleming v. Impax Labs. Inc. (N.D. Cal.) ($33 million recovery), and In re Banc of California Sec. Litig. (C.D. Cal.) ($19.75 million recovery).

The Firm is ranked #1 on the most recent ISS Securities Class Action Services Top 50 Report for recovering nearly $2 billion for investors in 2021 — more than triple the amount recovered by any other plaintiffs’ firm. The Firm secured the largest-ever securities fraud class action settlement — $7.2 billion — in In re Enron Corp. Securities Litigation.