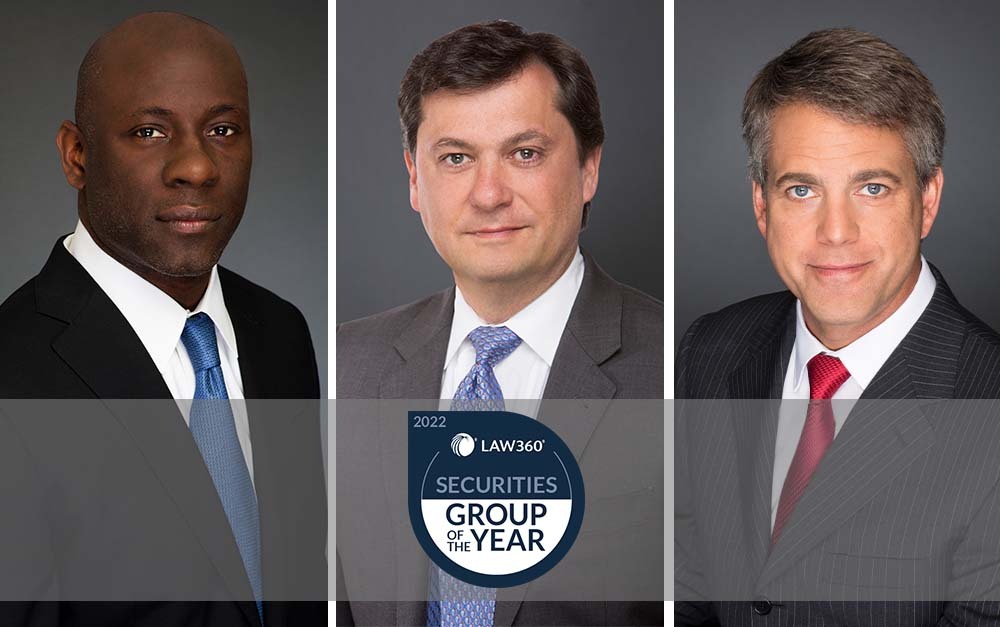 By Katryna Perera
Law360
Article is reprinted with the permission of Law360.

Law360 (January 18, 2023, 2:02 PM EST) -- Robbins Geller Rudman & Dowd LLP secured a record-breaking $809.5 million settlement for class members the day before jury selection was set to commence in a trial between Twitter Inc. and its investors, ending a suit that dated back to 2016 and earning the firm a spot as one of Law360's 2022 Securities Groups of the Year.

Robbins Geller partner Dan Drosman told Law360 that the Twitter case was hard-fought litigation from the beginning, and while there was probably an opportunity for a smaller settlement earlier on, the willingness of Robbins Geller to push the case to the brink of trial is what brought on the big final payday.

The deal Robbins Geller secured for Twitter investors received final approval in November and is ranked as the largest settlement in the history of the Ninth Circuit and the 19th-largest across all districts. The judge overseeing the suit also handed down $182 million in attorney fees.

The suit centered on claims that Twitter overstated user engagement in 2015 and caused shares to fall almost 15% in one day.

"This was like Armageddon for a social media company," Drosman said. "I mean, it was bad, bad news. And you think, god, just a few months ago everything was great and rosy, so that was what led us to investigate."

Drosman said he and a colleague spent an entire year investigating the claims before filing a complaint in 2016.

But it was tricky, because usually cases of this nature are also being investigated by government regulators or agencies, Drosman said. Here, Robbins Geller was the only one going in with a microscope.

"It was through this internal investigation that we conducted before we filed that we were able to sort of see a fraud that may not be facially obvious but was significant, and the defendants obviously recognized that when they settled," he said. "That sort of expertise is one of the things that clients come to us for, they look at our ability to really put the facts together before we even file a complaint."

Ultimately though, it could be said that securing the big bucks for Twitter investors came from Robbins Geller's hallmark litigation approach of expecting a trial.

According to Drosman, one of the first large cases the firm handled in its history went all the way to trial, and the ability of Robbins Geller lawyers to work with evidence and take litigation through the riskiest phases has become a defining feature of the firm.

Partner Shawn Williams told Law360, "We kind of look at every case with an eye toward the fact that we are likely going to have to try it in two, three, four, five, seven years down the line, and so that experience and vision allows us to strategize for the long term … and we can recognize early on issues that are likely to arise three years from now and engage experts that we think will be necessary early on."

Being trial-ready also helps increase the value of potential settlements, Drosman said, and he added that this consistent approach to litigation is what keeps clients coming back to Robbins Geller and why the firm has been so successful.

This depth of familiarity with working a jury helped Robbins Geller prevail in a 2019 trial against Puma Biotechnology Inc. and its CEO, Alan Auerbach.

Investors filed suit against Puma in 2015, alleging the Los Angeles-based biopharmaceutical company and Auerbach made false and misleading statements about the effectiveness of a breast cancer treatment being developed by Puma.

When the market realized that the disease-free survival rates of neratinib — also known by the brand name Nerlynx — were different from what Puma previously disclosed, Puma's shares declined by 18.6%, or $39.05 per share, the investors said.

A California federal jury determined in 2019 that Puma made misrepresentations in one of four contested statements about the clinical trial results and awarded investors damages worth $4.50 per share.

After the verdict, Robbins Geller continued to litigate issues involving individual claimants and eventually reached a $54.25 million settlement in December 2021, representing a 100% recovery of the total claimed damages plus prejudgment interest, according to the firm. The deal received final approval in August.

Investors had alleged the shipping company concealed its fraying relationship with the U.S. Postal Service to artificially inflate its stock value while its chief executive officer engaged in what they said was illegal insider trading.

Robbins Geller partner Darren Robbins told Law360 that the firm went through the beginning stages of the litigation very aggressively, which made clear to the defense early on that there was not going to be a "low exit."

"When we announced the $100 million result, I got calls from multiple plaintiffs law firms saying, 'Are you kidding me?'" Robbins said.