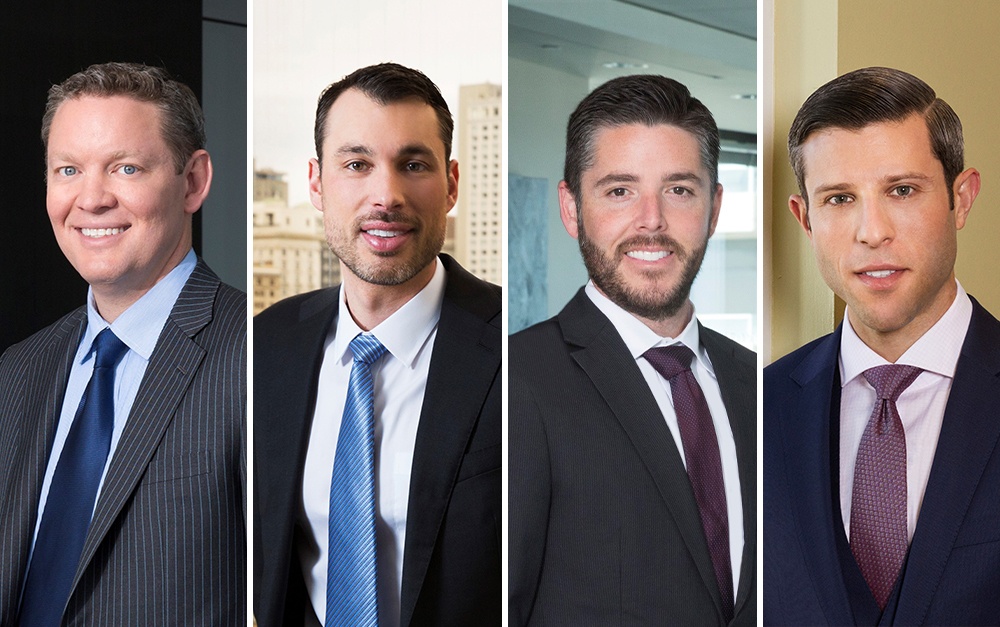 Benchmark Litigation has again recognized Robbins Geller partners David A. Knotts, Daniel J. Pfefferbaum, Darryl J. Alvarado, and Jason H. Alperstein to its 2020 40 & Under Hot List for being “ambitious and accomplished lawyers [who] frequently handle major cases – some of which are high-stakes or precedent-setting.” The publication honors “the best and brightest law firm partners who stand out in their practices throughout the US and in Canada.” These Robbins Geller partners are not only a “group of litigators [who are] diverse and enthusiastic, [but] ready to take the reins from previous generations. … They are able to adapt to rapidly changing times in addition to juggling their flourishing careers and personal lives, and all while staying on top of their industry,” said Benchmark.

Honorees were chosen through several phases of research. The extensive process, which encompasses six months of research into the litigators’ professional activities, as well as client feedback surveys and interviews, has culminated in the selection of the country’s most distinguished attorneys in litigation.

Honored for the second time, David focuses his practice on securities class action litigation in the context of mergers and acquisitions, representing both individual shareholders and institutional investors. He has been counsel of record for shareholders on a number of significant recoveries in courts throughout the country, including In re Rural/Metro Corp. Stockholders Litig. (nearly $110 million total recovery, affirmed by the Delaware Supreme Court in RBC v. Jervis), In re Del Monte Foods Co. S’holders Litig. ($89.4 million), Websense ($40 million), In re Onyx S’holders Litig. ($30 million), and Joy Global ($20 million), to name a few. Websense and Onyx are both believed to be the largest post-merger class settlements in California state court history. When David recently presented the settlement as lead counsel for the stockholders in Joy Global, the United States District Court for the Eastern District of Wisconsin noted that “this is a pretty extraordinary settlement, recovery on behalf of the members of the class.”

Darryl receives the accolade for the third consecutive year. He helped secure $388 million for investors in J.P. Morgan residential mortgage-backed securities in Fort Worth Employees’ Retirement Fund v. J.P. Morgan Chase & Co., a settlement that is the largest recovery on a percentage basis ever achieved in an RMBS class action. He was also a member of the team of attorneys that secured $95 million for investors in Morgan Stanley-issued RMBS in In re Morgan Stanley Mortgage Pass-Through Certificates Litigation. Most recently, Darryl served as part of the lead counsel team in Smilovits v. First Solar, Inc., that obtained a $350 million settlement on the eve of trial, which settlement is the fifth-largest PSLRA settlement ever recovered in the Ninth Circuit.

Receiving the honor for the fourth year, Jason focuses on consumer fraud, securities fraud, mass torts, and data breach litigation.  He was an integral member of the team that litigated In re Volkswagen “Clean Diesel” Marketing, Sales Practices, & Prods. Liab. Litig., No. 15-md-2672 (N.D. Cal.), prosecuting claims on behalf of almost 600,000 consumers who were duped into purchasing and leasing Volkswagen, Audi, and Porsche vehicles that were marketed as environmentally friendly, yet spewed toxic pollutants up to 40 times the legal limit permitted by the EPA. Working closely with Plaintiffs’ Steering Committee (“PSC”) member Paul J. Geller, Jason was involved in almost all aspects of the litigation. The PSC and government agencies ultimately reached a series of settlements on behalf of purchasers, lessees, and dealers that totaled well over $17 billion, the largest consumer automotive settlement in history.

Rankings result from the culmination of a lengthy research period, during which Benchmark researchers conduct thousands of interviews with litigators and their clients. Recent casework handled by the firms is examined, and sources are asked to offer their professional opinions on the attorneys practicing within their state or national practice areas. For more detailed information regarding Benchmark’s selection methodology, visit its official website.