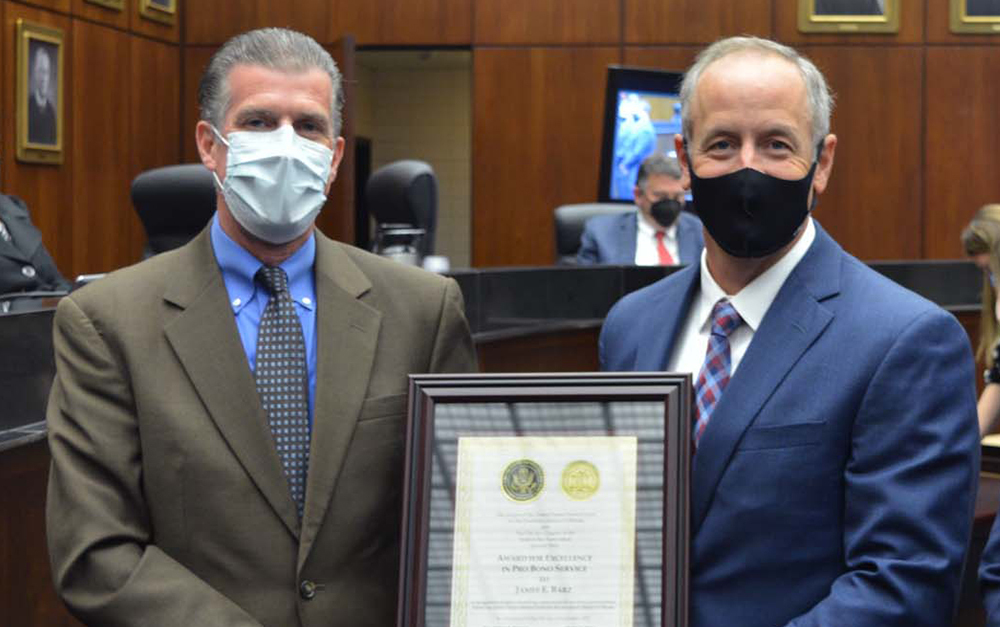 On September 9, 2021, Robbins Geller partner Jim Barz was honored by the Judges of the United States District Court for the Northern District of Illinois with an Award for Excellence in Pro Bono Service. “We are delighted to honor many lawyers who met the important obligation of pro bono representation,” stated Chief Judge Rebecca R. Pallmeyer.

Jim was honored for his work in Lymon v. Chamberlain after being appointed to represent Mr. Lymon who alleged he received inadequate medical treatment while incarcerated, contrary to constitutional protections. At the ceremony, the Honorable Iain D. Johnston of the United States District Court for the Northern District of Illinois, who had been a co-nominator for Jim, noted that five prior attorneys had withdrawn before Jim accepted the appointment and brought the case to a successful conclusion. Jim, along with a team of lawyers from Robbins Geller’s Chicago office, litigated the case for two years, taking ten depositions during the height of the COVID-19 pandemic. Judge Johnston noted that Jim pursued a novel strategy that succeeded in prevailing on a motion to compel documents against the defendants which ultimately led to a settlement shortly thereafter.

“It was an honor to be recognized, along with many others, by the judges of the Northern District of Illinois at this ceremony,” said Jim. “I’ve done several trials and represented many individuals on a pro bono basis throughout my career and giving back and helping individuals who cannot afford adequate representation is highly valued and supported at Robbins Geller.” The team included Robbins Geller attorney Frank Richter “who fought very hard to achieve a good result for our client,” noted Jim.

Jim is the managing partner of the Firm’s Chicago office where he focuses his practice on representing investors in securities fraud class actions. Most recently, Jim was lead counsel in In re Valeant Pharms. Int’l, Inc. Sec. Litig., a case that Vanity Fair reported as “the corporate scandal of its era” that had raised “fundamental questions about the functioning of our health-care system, the nature of modern markets, and the slippery slope of ethical rationalizations.” The Valeant $1.2 billion recovery for investors is the largest securities class action settlement against a pharmaceutical manufacturer and the ninth-largest securities class action settlement ever.