Litigators of the Week: The Shareholders’ Team Behind the Record $1B Cash Settlement with Dell 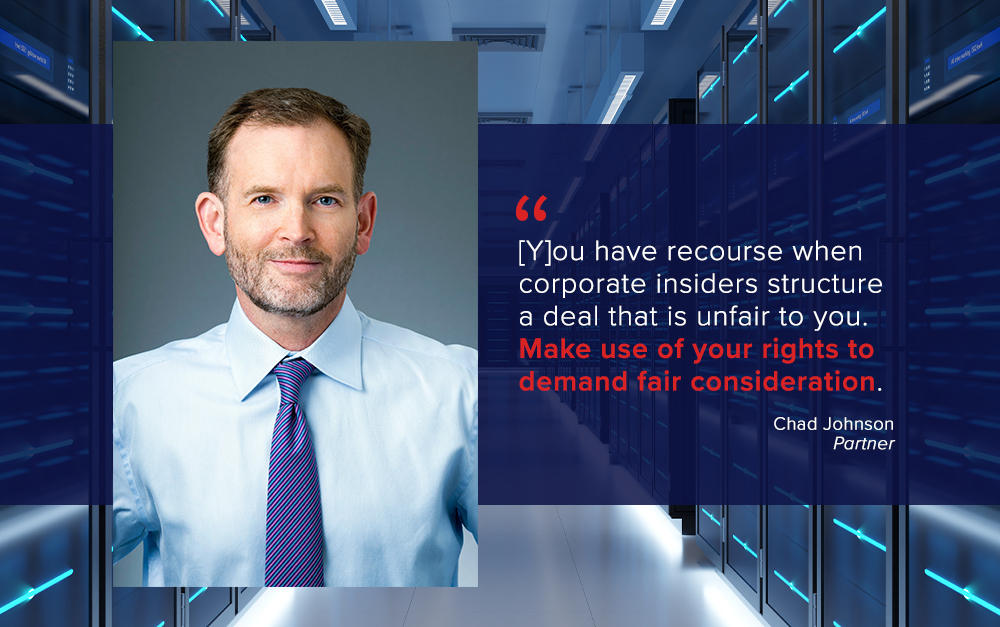 Three weeks before a scheduled trial in Delaware’s Court of Chancery, Silpa Maruri of Quinn Emanuel, Ned Weinberger of Labaton Sucharow, and Chad Johnson of Robbins Geller hammered out a settlement for Dell minority shareholders who claim they were shortchanged in a 2018 stock conversion deal.

By Ross Todd
November 18, 2022
Reprinted with permission from The AmLaw Litigation Daily.

With Dell Technologies Inc. facing a potential trial next month in Delaware Chancery Court on claims it short-changed some shareholders in a 2018 stock-conversion deal, the company announced this week that it’s set to pay out a $1 billion cash settlement to the plaintiffs.

The deal, which comes two-and-a-half years after Vice Chancellor Travis Laster turned back a defense bid to knock out the suit, still requires sign-off from the court. If approved, it would mark a new high for shareholder settlements in the Court of Chancery.

This week’s Litigators of the Week are the plaintiffs’ team led by Silpa Maruri of Quinn Emanuel Urquhart & Sullivan, Ned Weinberger of Labaton Sucharow, and Chad Johnson of Robbins Geller Rudman & Dowd. They led lawyers from their firms and Friedman Oster & Tejtel and Andrews & Springer.

Lit Daily: Who are your clients and how do they claim they were shortchanged in the underlying deal?

Ned Weinberger: Our clients are Steamfitters Local 449 Pension Plan (the lead plaintiff) and the entire class of former minority holders of Dell Class V tracking stock. Dell had marketed Class V as essentially the economic equivalent of a publicly-traded share of VMware. However, Class V never traded anywhere near the price of VMware. We argued that was because of market fears that Dell’s controlling stockholders would one day take out Class V on unfair terms. Fast forward to the transaction in 2018, and that’s precisely what happened. Through coercive tactics and a misleading proxy statement, Dell bought back all of the shares Class V for substantially less than their fair economic value.

Who all was part of the plaintiffs’ team here and how did this group come together?

Weinberger: The team was Labaton Sucharow and Quinn Emanuel acting as co-lead counsel; three other firms—Friedman Oster, Andrews & Springer, and Robbins Geller—served as additional counsel, though their roles were hardly secondary. When this case materialized in 2018, my firm, Quinn Emanuel, and Friedman Oster had just finished successfully litigating another stockholder case in Delaware. With Steamfitters’ blessing, we decided to join forces again. We also had a strong, historical relationship with Andrews & Springer, and decided they would be a good fit for the team. Robbins Geller entered the mix a little bit later after Chad—who I’ve worked with for years and who was with Quinn Emanuel in 2019 when the court entered its leadership order—moved over to Robbins Geller.

In this case, we knew we would be dealing with an army of lawyers on the other side and determined that having our own large, diverse team of lawyers from multiple firms could be beneficial to the class. I think the result here proves that those instincts were correct.

How did you divide the labor when it came to the work that went into driving this settlement?

Silpa Maruri: Our firms all worked seamlessly together to divide and conquer different aspects of the case. We quickly decided that different firms would take on mastering different components of the case, after which we took that work product and collaborated as a group to merge our ideas. That approach allowed for very effective and efficient collaboration, so that all of the firms knew all aspects of the case well.

So what’s important here for other shareholders who might find themselves in a position similar to your clients?

Chad Johnson: As a minority shareholder, you have recourse when corporate insiders structure a deal that is unfair to you. Make use of your rights to demand fair consideration.

And what about the flipside: What’s important in terms of corporate governance?

Maruri: One of the most significant lessons is about the application of the MFW test, which controls how a court will evaluate transactions involving a controlling shareholder. This case shows that Delaware courts will look carefully at whether or not the steps to implement MFW were meaningfully followed before applying a deferential standard of review.

Securities cases so rarely get tried and trial was just three weeks away when this deal was announced. Is there any part of you that regrets not getting to take these claims to trial?

Maruri: As a trial lawyer, there is always a part of me that regrets missing out on the thrill of trial when a case settles. That is particularly true here for me, because the lawyers that were involved are just so talented. That includes my partner, David Cooper—one of the most brilliant lawyers I’ve ever met. It also includes our associates, Will Sears and George Phillips, who impressed me every day with their dedication and thoughtfulness about this case, and the fantastic lawyers at Labaton, RGRD, Friedman Oster, and Andrews & Springer.

The company has filed the 8-K disclosing the deal. What’s left to do to get a deal before the court and, if approved, get checks out to your clients?

Weinberger: The next step is to execute definitive settlement documentation and submit it to the court. That should happen before the end of the year. At that time, we’ll also ask the court to enter a scheduling order contemplating notice to the class, followed by a final settlement approval hearing. Ordinarily, the hearing takes place approximately 60 days after we begin mailing the notices. Assuming the court approves the settlement, it’s then our responsibility to work as quickly as possible to begin distributing the settlement proceeds to class members.

What will you remember most about this matter?

Johnson: The journey: All the way from getting input from naysayers who thought this case would be too hard to prove, to putting the individual defendants under oath and demanding an explanation for their conduct, to the eve of trial when the defendants agreed to pay an amount that will fairly compensate shareholders.

Maruri: The incredible record that we built for the shareholder class through painstaking effort. I could not be prouder of the work that our firm and our co-counsel did to pave the way to this result, particularly the work of our younger lawyers like Will Sears and George Phillips, who were instrumental in building our case.

Weinberger: That’s a really tough question. There are the “war stories.” There are the bonds formed with so many team members. But for some reason the thing that stands out to me is the tenor of the day-to-day litigation. This was a hotly contested case, no doubt, but I think there was a remarkable amount of professionalism on both sides. In the end, the job is to serve the client. I think we best serve our client, and ultimately get a lot more done, when we can leave some of the antics and bellicose nonsense behind.

Reprinted with permission from the November 18, 2022 edition of the AMLAW LITIGATION DAILY © 2022 ALM Global Properties, LLC. All rights reserved.