Robbins Geller is widely regarded as a leader in the fight to protect investors from corporate securities fraud. ISS Securities Class Action Services has ranked Robbins Geller as one of the top law firms in the world in both amount recovered and total number of class action settlements for shareholders every year since 2010. For 2020, the SCAS Top 50 Report ranked Robbins Geller number one for recovering $1.6 billion for investors – more than double the amount recovered by any other plaintiffs‘ firm. As the report noted, Robbins Geller was “the only plaintiff law firm to surpass the $1 billion threshold.”

Robbins Geller is uniquely positioned to uncover and prosecute SPAC-related securities fraud.  Robbins Geller hosts an unparalleled stable of top-notch litigators and in-house specialists.  In addition, the Firm developed and serves as court-appointed lead counsel in one of the first securities class actions arising from the latest wave of blank check financing, In re Alta Mesa Resources Inc. Sec. Litig., No. 4:19-cv-00957 (S.D. Tex.) – a case alleging defendants knowingly inflated claimed oil reserves prior to a SPAC merger, ultimately leading to a $3.1 billion write down and 99% stock decline. On March 31, 2021, the United States District Court for the Southern District of Texas denied defendants' motions to dismiss in their entirety.

If you have information about a blank check company or SPAC merger, you can confidentially submit this information by emailing attorney Brian E. Cochran at bcochran@rgrdlaw.com. Check below for the latest SPAC-related news and securities class action litigation updates.

Blank check companies are experiencing an historic resurgence in popularity.  In 2019, SPAC IPOs raised $13.6 billion.  In 2020, the money raised by SPAC IPOs grew exponentially to over $83 billion – more than the prior ten years combined and more than the entire traditional IPO market. The blank check bonanza has continued to accelerate, with the first three months of 2021 already eclipsing 2020’s record-setting total. 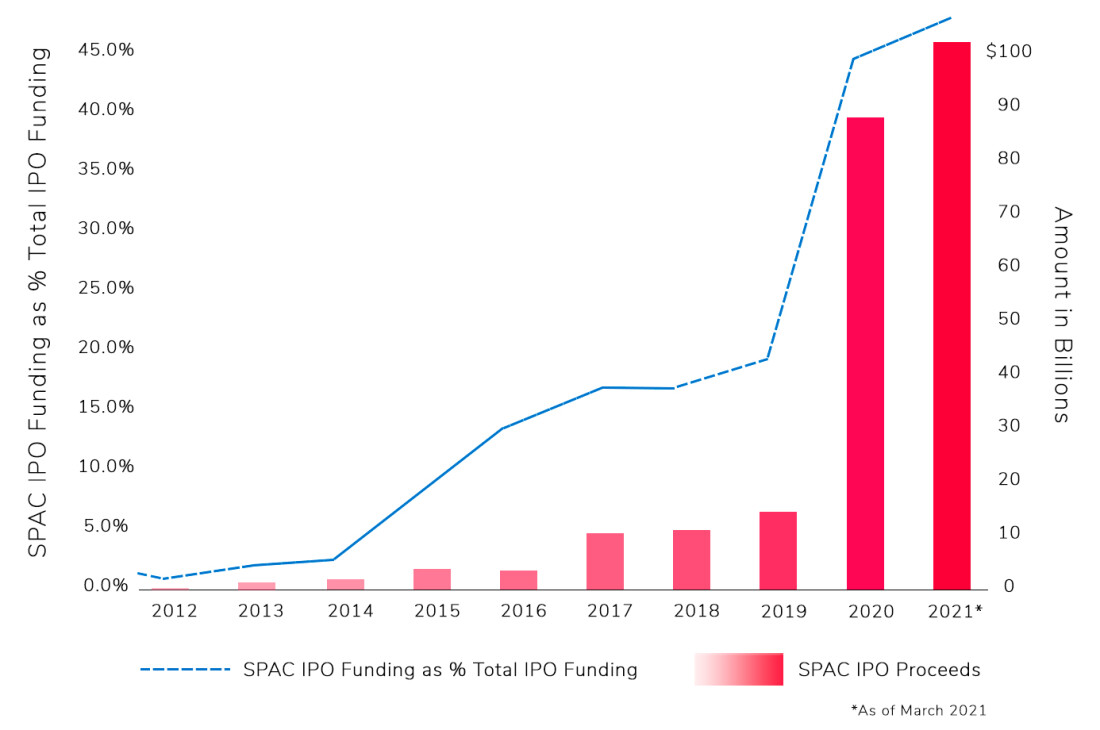 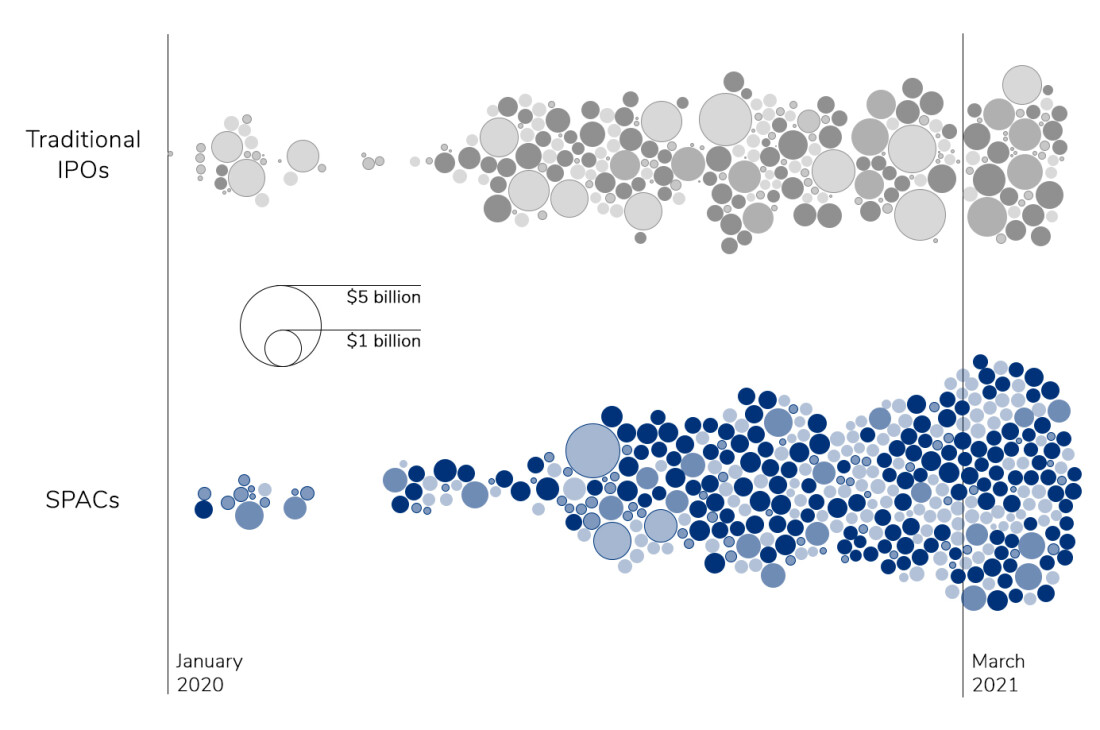 Blank check companies get their name from the fact that they have no business or operations at the time of their IPO.  Instead, SPAC sponsors use IPO proceeds to acquire a business, often within a specified industry.  Because the target business is unknown to investors, the skill, experience, and diligence of the SPAC sponsor is of paramount importance.

SPACs are typically priced at $10 per unit during the initial IPO. SPAC “units” are securities comprised of common stocks and warrants. A warrant gives the holder the right to purchase a certain number of additional shares of common stock in the future at a certain price. The blank check company’s common stock and warrants may also trade separately. SPAC IPO proceeds are held in an interest-bearing trust account.

After a target company is identified, SPAC shareholders vote on the deal. SPAC shareholders can elect to redeem their shares rather than participate in the merger, entitling them to the pro rata amount of funds held in the blank check company’s trust account. If the SPAC deal is approved, the target business reverse merges with the blank check company, allowing it to become publicly traded. If a SPAC sponsor fails to complete a business combination within the allotted time frame (typically 24 months), proceeds from the SPAC IPO are returned to investors.

Proponents of the SPAC structure claim it offers a faster and cheaper route to a public listing for private companies as compared to a traditional IPO.  In addition, the ability of SPAC investors to redeem their shares prior to a merger provides initial risk protections with significant potential upside if a deal is viewed favorably by the market.

The structure of blank check companies poses heightened risks to SPAC investors and makes them vulnerable to fraud and abuse. Typically, SPAC sponsors receive a fee of 20% of company shares if the blank check company successfully completes a merger. This fee can be worth hundreds of millions of dollars. But the lucrative 20% SPAC sponsor fee is forfeited if no initial business combination is completed. This, in turn, creates a strong incentive for blank check sponsors to push for SPAC shareholders to approve any merger to ensure their payout, even if the deal is not in the best interests of SPAC shareholders.

Additional conflicts of interest, such as hefty management fees, may also pervade the SPAC deal and provide added incentives for blank check sponsors to misrepresent the business and prospects of the target company.  Moreover, less-stringent disclosure requirements apply to bringing the target company public than is the case in a traditional IPO, further jeopardizing a SPAC shareholder’s investment. For example, unlike traditional IPOs where historical financial results are the focus, SPAC sponsors can tout future financial projections in pitching the merger to shareholders. The recent dramatic increase in the number of SPACs searching for merger targets has only increased the pressure to merge with suspect companies.

Over time, SPACs have tended to significantly underperform the market.  From 2015 to July 2020, blank check companies lost 19% on average following a business combination, while traditional IPOs gained 37% during this same time frame. A recent study found that although SPACs initially price at $10 per unit, the median SPAC holds cash of just $6.67 per share by the time of the merger, causing SPAC investors to suffer significant dilution. Roughly 60% of SPACs that acquired businesses between 2016 and 2020 lagged the S&P 500’s performance. And as of late January 2021, about 40% of these SPACs traded below their starting prices.

Several recent high-profile blank check company acquisitions have allegedly caused SPAC shareholders to suffer billions of dollars in collective losses because of fraud, mismanagement, and self-dealing.  Investors are turning to securities fraud class action litigation to seek redress for these injuries.  The following securities class actions have been launched by blank check shareholders in 2022: