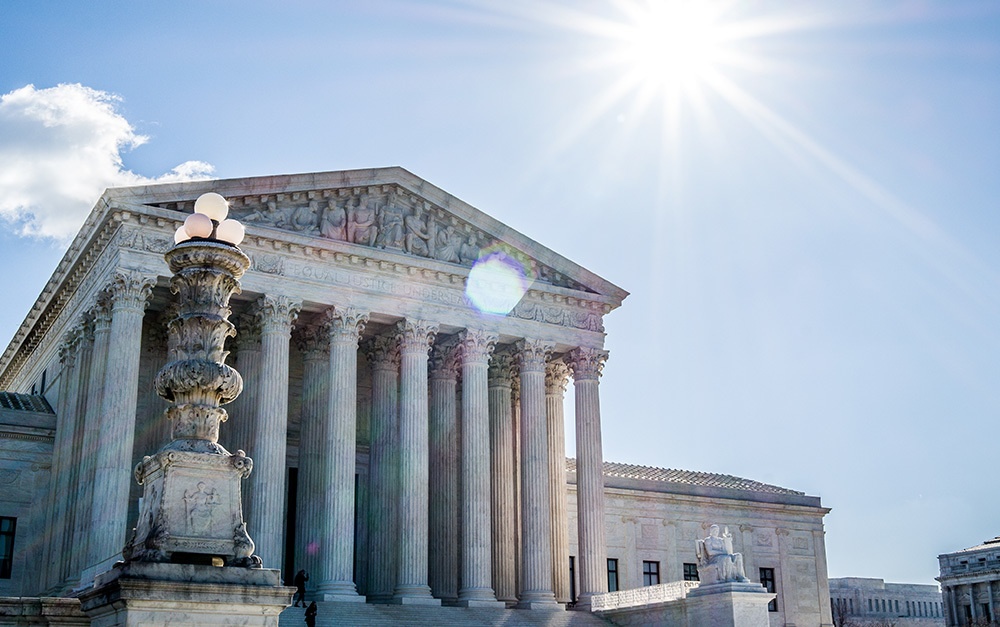 The U.S. Supreme Court is currently considering a wide range of issues in securities cases that are likely to impact investors’ ability to recover for losses caused by corporate wrongdoing. Specifically, the cases currently being considered by the Supreme Court involve: who can be held liable for participating in a scheme to defraud investors; the showing required to prove loss causation; investors’ ability to assert claims when American Depositary Receipts (“ADRs”) are purchased in the United States; the ability to assert claims arising out of materially misleading tender offer statements without alleging scienter; and whether defendants are required to update a statement of historical fact that was accurate when made, but subsequently becomes inaccurate due to additional information or circumstances.

In Lorenzo, the petitioner’s question presented is whether the D.C. Circuit erred in concluding a misstatement claim that does not meet the elements set forth in Janus can nonetheless be pursued as a fraudulent scheme claim under §10(b).2 The SEC’s question presented is whether a person who knowingly disseminates false or misleading statements in connection with a securities transaction can be found to have violated §10(b) even if the person does not “make” a false or misleading statement.3

The four justices who dissented from the Janus decision (Ginsburg, Breyer, Sotomayor, and Kagan) are still on the Court. During the December 3, 2018 argument, Justice Alito asked the broker’s counsel why sending emails with false statements did not “fall squarely within the language” of the statute.4 The Supreme Court should issue a decision in Lorenzo by June 2019.

In First Solar, the Supreme Court is considering whether to grant defendants’ Petition for a Writ of Certiorari regarding the correct test for loss causation, an element of a §10(b) fraud claim. In deciding whether to grant defendants permission to appeal, the Supreme Court has invited the U.S. Solicitor General to file a brief expressing the views of the United States on the questions presented. Defendants’ question presented is whether a private securities-fraud plaintiff may establish the critical element of loss causation based on a decline in the market price of a security even if the event or disclosure that triggered the decline did not identify the fraud on which the plaintiff’s claim is based.5 Plaintiffs’ question presented is whether the “causal connection between the material misrepresentation and the loss” in securities fraud actions must conform to a particular pattern or may be dependent on fact-specific context.6

The underlying case alleges that First Solar discovered a manufacturing defect causing field power loss and a design defect that caused its solar panels to suffer power loss in hot climates. Plaintiffs allege that First Solar wrongfully concealed these defects, misrepresented the cost and scope of the defects, and reported false information on its financial statements. For example, while defendants internally described the problem as “‘a rather serious quality problem’” that is “‘[b]ad, bad bad, bad, bad’” and one of “‘the biggest smoking gun[s] we have at the company,’” a First Solar executive told investors one week after one of these admissions that “‘our track [record] of field performance and our knowledge of field performance allows us to have fairly high confidence that our product is delivering in the field.’”7

In considering defendants’ summary judgment motion as to loss causation, the district court applied the following loss causation test: “‘A plaintiff can satisfy loss causation by showing that “the defendant misrepresented or omitted the very facts that were a substantial factor in causing the plaintiff’s economic loss.”’”8 In affirming the district court’s application of the correct test for loss causation, the Ninth Circuit held that the loss causation inquiry – “proving that the act or omission of the defendant . . . caused the loss for which the plaintiff seeks to recover damages” (15 U.S.C. §78u-4(b)(4)) – “requires no more than the familiar test for proximate cause.”9 The Ninth Circuit further reiterated that “‘[d]isclosure of the fraud is not a sine qua non of loss causation, which may be shown even where the alleged fraud is not necessarily revealed prior to the economic loss.’”10

In Toshiba, the Supreme Court is considering whether to grant defendants’ Petition for a Writ of Certiorari regarding the nature of domestic transactions in securities required to invoke the protections of the U.S. securities laws as outlined in Morrison v. Nat’l Austl. Bank Ltd., 561 U.S. 247 (2010). As in First Solar, the Supreme Court has invited the U.S. Solicitor General to file a brief expressing the views of the United States on the questions presented. In addition, about half a dozen amicus curiae (friend of the court) briefs have been filed by various interested parties.

By way of background, the Supreme Court held in Morrison that the anti-fraud provisions of §10(b) of the Exchange Act do not apply extraterritorially. Rather, the statute only prohibits misconduct in connection with “the purchase or sale of a security listed on an American stock exchange” or “the purchase or sale of any other security in the United States.” Id. at 273.

The underlying case in Toshiba alleges that over the course of nine months in 2015, Toshiba made a series of disclosures that revealed a massive, multi-year accounting fraud at the company which Toshiba’s own internal investigation concluded was “carried out . . . in an institutional manner.”  After Toshiba’s internal investigation and an outside investigation by an Independent Investigation Committee, Toshiba made a formal restatement of more than six years of reported financial results that eliminated approximately one-third ($2.6 billion) of the profits Toshiba had reported between 2008 and 2014. The investigations also led to a $1.3 billion writedown of goodwill at Toshiba’s U.S. nuclear business, Westinghouse Electric Co., and the termination of nine Toshiba senior executives. Following the disclosure of the fraud, the price of Toshiba’s securities – and the ADRs that move in tandem with that price – dropped by more than 40%.

The complaint alleges that defendants made false and misleading statements and omissions in violation of the Exchange Act and the Financial Instruments and Exchange Act of Japan, and is brought on behalf of a class of U.S. investors, including purchasers of ADRs on the over-the-counter (“OTC”) market and Toshiba common stock on the Tokyo exchange. The district court dismissed the case with prejudice on the grounds that the OTC market by which ADRs are sold was not a “national exchange” within the meaning of Morrison, and that there was not any domestic transaction between ADR purchasers and Toshiba. Having dismissed the Exchange Act claims, the district court dismissed the Japanese law claim on the basis of comity and forum non conveniens.

On appeal, the Ninth Circuit first held that “Toshiba ADRs fit comfortably within the Exchange Act’s definition of ‘security.’”11 And, while the Ninth Circuit determined that the OTC market was not an “exchange” as the Exchange Act defines the term, U.S. investors’ purchase of ADRs on the OTC qualified as “domestic transactions in other securities” – the second Morrison prong. As such, the Ninth Circuit reversed the district court’s decision, remanding with leave to amend the complaint.

In Emulex, the Supreme Court is considering whether to grant defendants’ Petition for a Writ of Certiorari regarding the level of culpability required (negligence or scienter) to state a claim pursuant to §14(e) of the Exchange Act challenging false statements and omissions in connection with a tender offer, and whether §14(e) contains a private right of action at all (i.e., whether only the SEC may sue for violations, or whether private investors may also sue for damages). Unlike First Solar and Toshiba, the Supreme Court has already granted the petition, and merits briefing will occur in 2019.

The underlying case arises from a merger between Emulex Corporation and Avago Technologies Wireless (USA) Manufacturing Inc. in which defendants allegedly issued a materially false and misleading statement to obtain the requisite number of shares tendered. Specifically, the complaint alleged that the fairness opinion issued by Goldman Sachs opined that the merger was fair from a financial perspective despite a below-average premium. The complaint also alleges that the $8.00 per share price offered was inadequate given Emulex’s significant growth leading up to the tender offer and the company’s prospects for future growth.

Defendants’ question presented is whether §14(e) of the Exchange Act supports an implied private right of action based on a negligent misstatement or omission made in connection with a tender offer.15 Plaintiffs’ question presented is whether an action solely premised on an untrue or misleading statement that is not predicated on fraudulent or deceptive conduct requires scienter.16 Plaintiffs also caution that defendants’ second question – the private right of action – was not addressed in the lower courts and should not be reviewed for the first time in the Supreme Court; in fact, defendants conceded a private right of action existed in the underlying case and therefore the question is waived.

The defendants in Emulex urged the Supreme Court to grant review – which it did – to resolve the split between the Ninth Circuit’s negligence standard and five other circuit courts’ scienter standard. Briefing will continue in 2019.

In Hagan, the Supreme Court is considering whether to grant defendants’ Petition for a Writ of Certiorari regarding whether corporate issuers have a duty to update under SEC Rule 10b-5(b). This petition for permission to appeal is in its infancy, with only defendants’ petition having been filed; the response is due March 6, 2019.

Defendants’ petition suggests there is a circuit split on whether the federal securities laws impose a duty on corporate issuers to update a statement that was accurate when made but later became misleading because of subsequent events, with the Seventh Circuit rejecting any duty to update, the First, Second, Third, Fifth, and Eleventh Circuits recognizing a duty to update exists in certain circumstances, and the Ninth Circuit supposedly “creat[ing] a duty to update an accurate statement of historical fact when the ‘value’ or ‘weight’ of that statement has been ‘diminished’ by subsequent events.”17 Defendants’ question presented is: “Whether the Court should resolve the current circuit split regarding a corporate issuer’s duty to update under Securities and Exchange Commission Rule 10b-5(b) and find that the Ninth Circuit erred by imposing such a duty to a statement of historical fact that was accurate when made, where the ‘value’ or ‘weight’ of that prior statement was later ‘diminished’ by subsequent events.”18

Each of these decisions could significantly impact investors’ ability to hold wrongdoers accountable for violations of the federal securities laws.

Considering the four most recent Supreme Court decisions concerning securities litigation have been decided by a varying mix of justices, it is difficult to predict the outcome of any of these five current cases (assuming certiorari is ultimately granted): 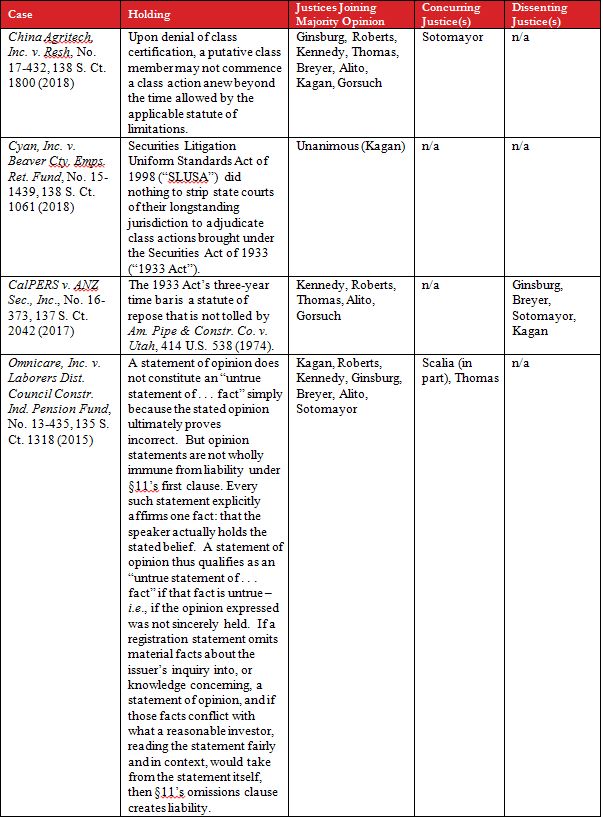 The fact that five securities cases are currently on the Supreme Court’s docket confirms that the stakes for institutional investors remain high. We will continue our efforts to favorably shape the law in this area.

Please don’t hesitate to contact us about these cases or any other questions you may have.

4Justice Kavanaugh is recused in this case as he dissented from the D.C. Circuit’s decision when it was issued.